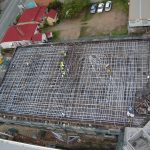 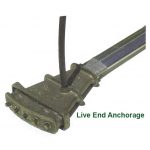 Concrete is one of the most widely used construction materials in the world. It is made up of natural stone called aggregate, sand, water and portland cement, which is made from firing a mixture of clay and limestone at high temperature then ground into a fine powder.

Post-Tensioning is a lot more flexible, it does not require a yard and can be implemented on the construction site. In post-tensioning construction a number of strands are placed within a duct within the concrete section. At each end of the duct an anchorage in formed being either a dead end or live end anchor. The concrete is then poured and left to reach sufficient strength then tension is applied to the strands by using a hydraulic jack at the live end. Upon completion of post-tensioning the tendons are pressure grouted resulting in a fully bonded tendon within the duct and concrete section.

Post-tensioning can be completed in large pre-casting units for the insitu construction of large structures such as bridges, bridge girders and transfer beams.

Given the versatility and cost advantages of prestressed and reinforced concrete, they both find their way into many forms of construction including buildings, bridges, power plants, towers, water and sewerage plants, dams, nuclear reactors, offshore oil drilling platforms, permanent water tanks and other water retaining structures.